A journey to Timbuktu and beyond for Festival au Desert, the world’s most remote music festival, reveals the people, music and magic of Mali. 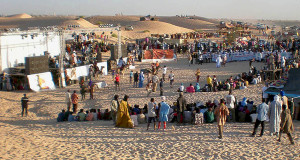 Festival au Desert, music on the sand and under the stars. Image: Michelle White

Beyond our camp, I could just make out a lightning-fast flurry of motion against flickering orange firelight – hands upon a drum, composing an insistent rhythm that froze me in my tracks to listen.  I twisted my feet into the Saharan sand beneath and gazed into the endless expanse of stars above, humbled by the superlatives of the continent where life began.

Continuing to the natural sand amphitheater fronting the main stage of Festival au Desert, my attention again turned to the local crowd.  In all directions, fervent outbursts of dancing, fiercely spirited and wholly surrendered to the sound, generated heat that countered the desert’s dropping temperatures.  Hailed as the world’s most remote music festival, Festival au Desert originates from annual reunions of the Tuaregs – Saharan nomads who date back to the pharaohs.  For three days each January, African and international musicians perform in Essakane, Mali, camping in the dunes along with visitors, organizers, and government dignitaries; 2010 marked the tenth anniversary.

Perhaps the performers most representative of the surroundings during my visit was Tinariwen, a riveting Tuareg ensemble playing guitar, bass and various percussion, their fingers tinged an inky blue from indigo turbans.  Indeed, “Tinariwen” means “desert” in their Tamashek language.  As they performed both jaunty and haunting melodies of love and loss, longing and political strife, I could feel both struggle and hope in their music.  This duality, repeatedly manifested within Africa, is rooted in the people’s connectedness with the landscape: harsh and unforgiving in its droughts, yet yielding brotherhood and sisterhood, with a mesmerizing peace in its vast beauty. 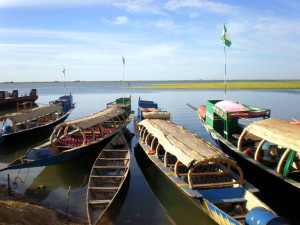 Though le festival was the catalyst for my trip to Mali, I figured such a long journey warranted at least two weeks to explore the destination.  I discovered Mali’s landscapes to be surprisingly diverse, with the Niger River dividing the sun-baked desert of the north from the statuesque baobab trees and terra-cotta-colored sands of the lush south.  The country’s touristic points of interest are well spread-out, but the options to drive, fly or float the Niger between them make for fascinating journeys in themselves.

As for conversing with locals, the country’s official language of French is not known everywhere, but the greeting “Ça va?” (“How is everything?”) – and identical (except for intonation) response “Ça va” (“Everything is fine”) – is ubiquitous throughout Mali.  Local people joke that they begin to greet someone approaching from a long distance away, and continue, looking over their shoulders, after they have passed each other, with an extensive litany of positive affirmations.  “Et la famille, ça va?”  “Ça va la famille.”  “Et le travaille, ça va?”  “Ça va le travaille.”  And so on with family, work, animals, home, health, etc.

With a storied name that has come to symbolize far-flung exotica, Timbuktu was once a major multicultural learning center and a trading post for gold, salt, ivory and slaves.  As in centuries past, it remains a city of dirt paths and dwellings made from mud and limestone. The buildings’ muted gray-brown color, however, hardly subdues the bright blue sky, vividly-dressed locals, and their sharply animated conversation – in any of the four to eight languages they are likely to know.

While far quieter than the bustling capital city of Bamako, Timbuktu still offers its own textured soundscape, blending the laughter of children, crying of sheep, braying of donkeys, and brazen roosters with their ‘cock-a-doodle-do’s beginning around 4:00 a.m. and continuing with gusto through the daylight hours.  Other ingredients of the city’s musical mélange include catchy, rhythmic tunes blasting from random homes and the muezzin’s call to prayer sounding over the loudspeakers of several mosques five times per day.

A unique quiet may be found in Dogon Country, a huge expanse of cliff-bound villages in the south, dating to around the fourteenth century when animists fled the spread of Islam and sought a defensible home.  Here, one evening while watching the sunset from high on a hill outside a village called Yandouma, I sat as an intensely peaceful silence sunk in.  Amid the quiet vastness of the dusky dunes, small lights punctuated the growing darkness as Dogon people in the village moved through their evening, unhindered by the loss of light, surefooted along the rocky precipices. 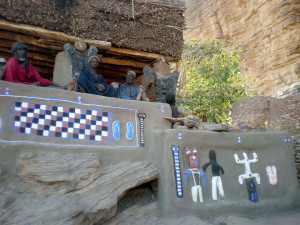 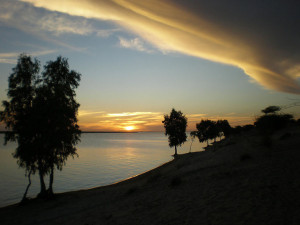 Indeed, the very architecture of Dogon helps to promote peace and quiet – or at least to avoid incensed confrontations.  Each Dogon village has its own togu’na, an open structure with rock columns – some decorated with colorful artwork – and a thatched roof.  Men sit and solve problems in the shade of this structure.  It is deliberately built too short for anyone to stand up, so that arguments will not escalate.  Remaining seated by necessity – or forgetting only to receive a painful thump on the head – helps to keep emotions level.

An even more soothing, quiet pace may be found on the Niger River in a pinasse – a traditional Malian boat.  I made a three-day, 370-kilometer journey from Timbuktu to Mopti, a port town at the junction of the Niger and Bani Rivers.  The pinasse roof was a perfect spot from which to regard subtly shifting scenery, from long stretches of greenery to sandy scrub desert, broken by sights of people, cattle, birds, and even hippos.  Listening to a fisherman bailing his boat, the slow, rhythmic slap…slap of the water returning to the river conveyed new music altogether.

The anticipation of rousing music from Mali’s most acclaimed artists had originally lured me to West Africa.  And I had some preconceived notion of the magnitude of the Sahara, which could encompass the U.S. within its borders.  But my most memorable discoveries were the music naturally inherent in the country’s varied terrain, and Mali’s spirited people, who not only survive, but thrive within one of the harshest natural environments in the world.

*Check out our Mali Guide by Michelle White featuring hotels, restaurants, guided tours and other information to help you plan a memorable trip to Mali!

Awaken Your Inner Explorer With A River Cruise