Go car-free and ride the rails to the Funk Zone for hip hotels, fabulous food and libations. 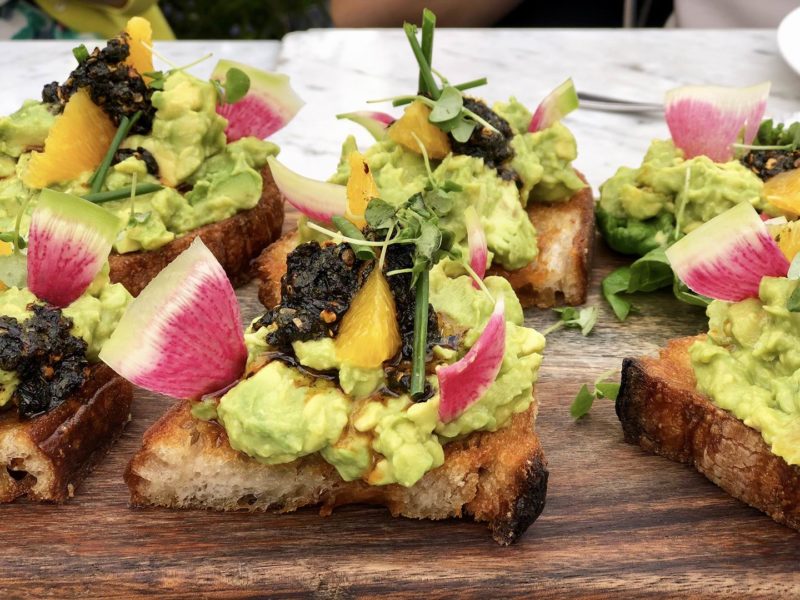 Get a taste of Santa Barbara from freshly baked breads and exquisite dinners, to sunset cruises and tiki bars. It’s easy to get around this cool, coastal town without a car — just walk, bike or take a trolley. The culinary scene in Santa Barbara is exploding and pairs well with its award-winning wineries. In between meals, explore Santa Barbara’s eclectic neighborhoods, from cruising in the harbor, exploring museums and art in the Funk Zone or taking a walking history tour in downtown. 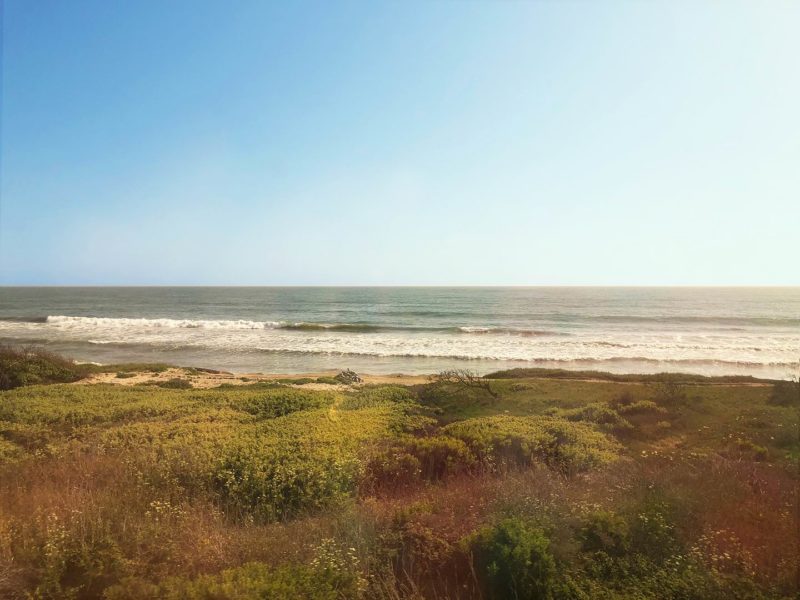 Start your trip with a leisurely train ride along the California coast on Amtrak’s Pacific Surfliner. Read a book, enjoy the changing scenery and arrive to your destination well-rested (no fighting traffic!). The train station is located in the hub of downtown Santa Barbara on State Street, just two blocks from the waterfront, with electric shuttles serving both of these main routes (only 50 cents/ride with free transfers). Save 20% on your ticket through Santa Barbara Car Free and show it to participating hotels and restaurants to receive further discounts. 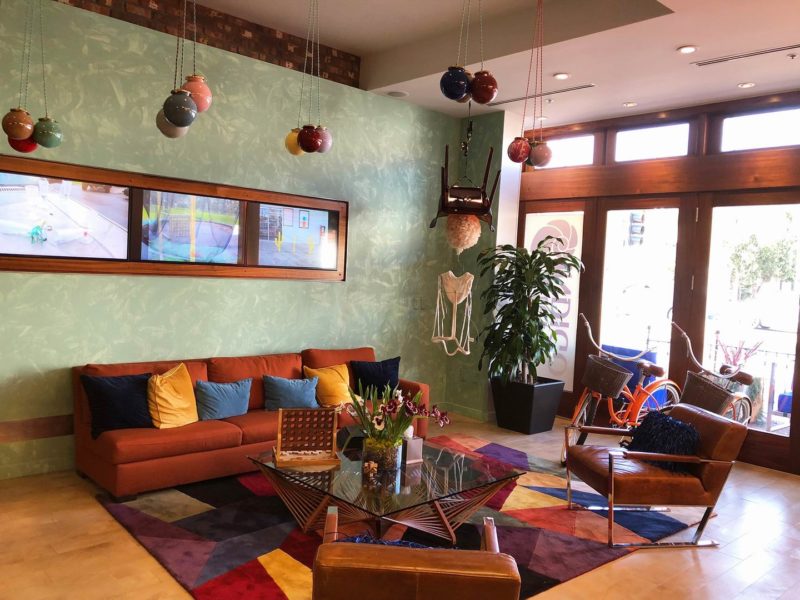 Only a 2-min. walk from the train station is the uber-cool Hotel Indigo, a new boutique hotel that proudly displays art installations from local artists (in partnership with MCA Santa Barbara). Although the rooms are pretty snug, the eco-friendly hotel makes up for it in style, hospitality and location. Walk down to the water, go wine tasting in the Funk Zone or check-out dozens of restaurants and shops along State Street. Hotel Indigo has pet-friendly guest rooms and offers private garden patios. For extra fun, go play next door at MOXI, The Wolf Museum of Exploration + Innovation, a new interactive museum that encourages hands-on learning. One block away is the fabulous Hotel Californian, which features Santa Barbara’s signature Spanish Colonial Revival architecture with a luxurious modern twist. Opened in 2017, the hotel resides in the perfect location — steps from the beach, Amtrak and the Funk Zone. 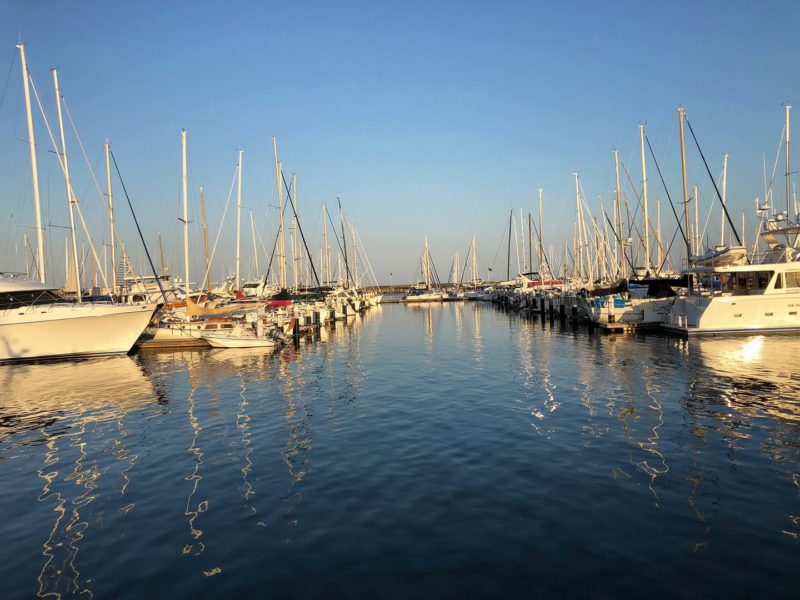 Before dinner, enjoy a sunset cruise aboard the Azure Seas, a 70 ft. yacht, from Celebration Cruises. The cruise is 1.5 hours, costs $40 and includes appetizers. Sipping a glass of local wine while looking out at the glistening water is pure bliss. While in the harbor, grab dinner at Chuck’s Waterfront Grill, an iconic restaurant that’s been serving steaks, seafood, and award-winning clam chowder for over 50 years. It’s a great place to gather around the fire pit, sit back and chat with friends, while admiring the boats. 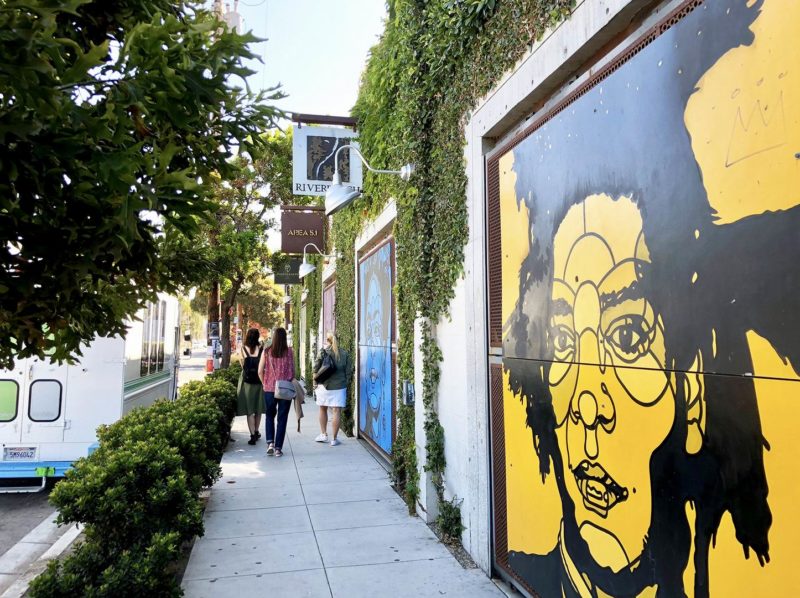 The next morning, walk over to Helena Avenue Bakery for a casual breakfast of freshly baked breads and pastries. Located in a historic warehouse, the bakery whips up custom-baked sweet and savory goodies, plus Americanos, lattes and cold brews. Take a walk through The Funk Zone, with its industrial, artistic vibe that proudly houses a superb collection of wineries and sought-after restaurants. Plan to come back later in the day, when the action picks up along the Urban Wine Trail, and pop into any of the 20+ tasting rooms or award-winning micro breweries. If you’re looking for a more exotic drink, try the Test Pilot, a fun tiki bar offering tropical favorites with a twist, like the Passion Fruit Mule or The Buccaneer served in a coconut. 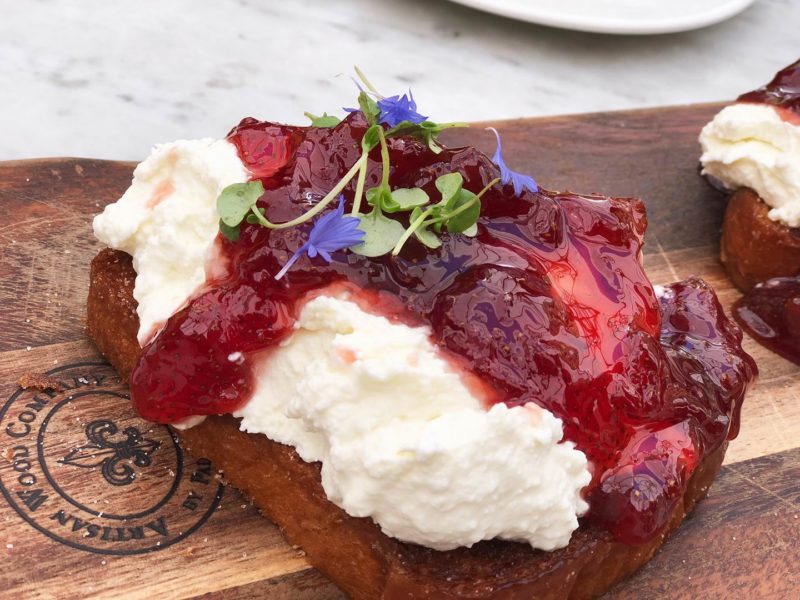 Another excellent brunch option in the Funk Zone is Les Marchands, well-known as one of the best wine bars in the country with a seasonal menu inspired by the great wine regions of the world. On the weekends, this European-style restaurant, serves up fried chicken and waffles, shakshuka (baked eggs, tomatoes, roasted peppers, onions and feta), waffles with whiskey peaches, and a house-made ricotta and strawberry jam brioche toast that’s to die for. 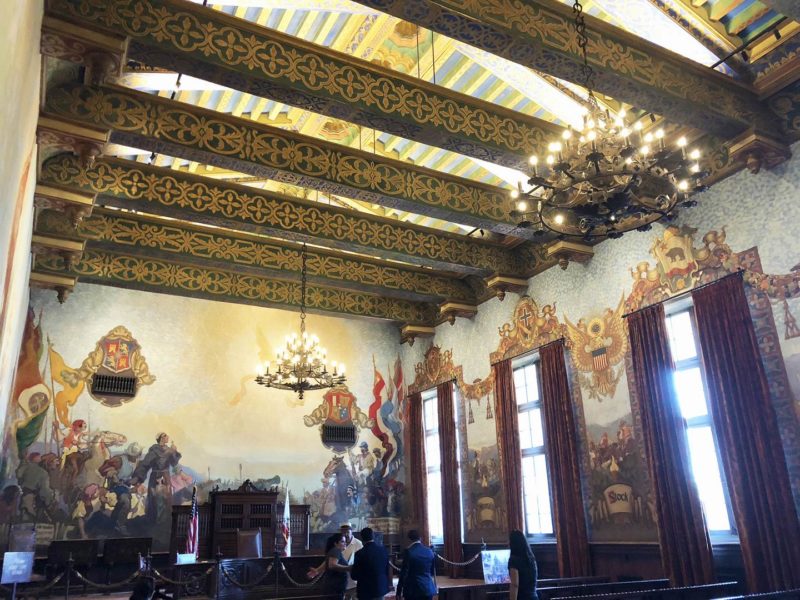 Spend the afternoon in downtown Santa Barbara on the Taste of Santa Barbara Tour (3.5 hrs). The walking tour stops for tastings at a few different venues, including Renaud’s Patisserie for French macarons and the Santa Barbara Public Market, an urban marketplace with a diverse collection of merchants. Be sure and try the olive oils at Il Fustino and get endless ice cream samples at Rori’s Artisinal Creamery. You’ll learn about Santa Barbara’s history and admire the signature Spanish Colonial Revival-style architecture seen throughout the city and the iconic Santa Barbara County Courthouse — the inside is very impressive as well. 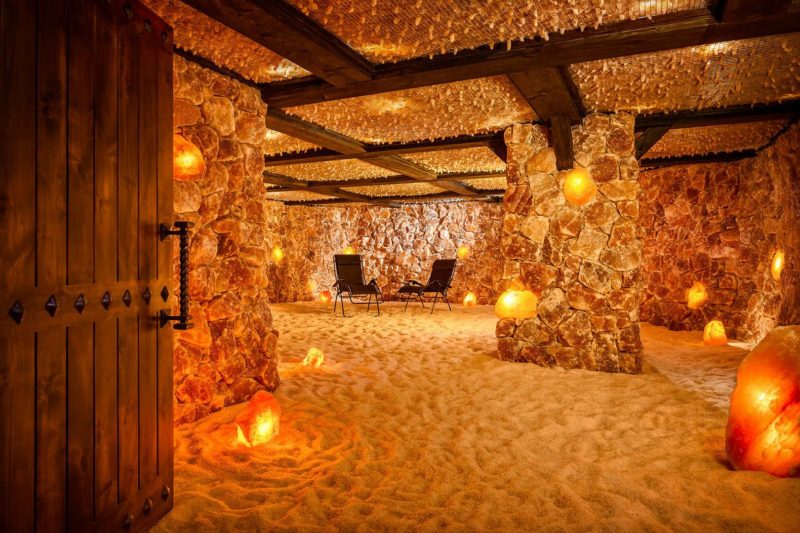 You’ll likely be tired after the tour, but instead of reaching for a cup of Joe, try a meditative experience at Salt — the largest underground man-made salt cave in North America. Over 60 tons of pink crystalline salt were imported from Pakistan to create this unique center for healing and wellness. During a 45-min. cave session, you can lie in a zero gravity chair, or on the pink salt floor with a blanket, and breathe in the salt-infused air. This halotherapy has been known to help improve inflammatory skin issues and respiratory conditions. At the very least, you’ll likely emerge from the cave feeling relaxed and energized. 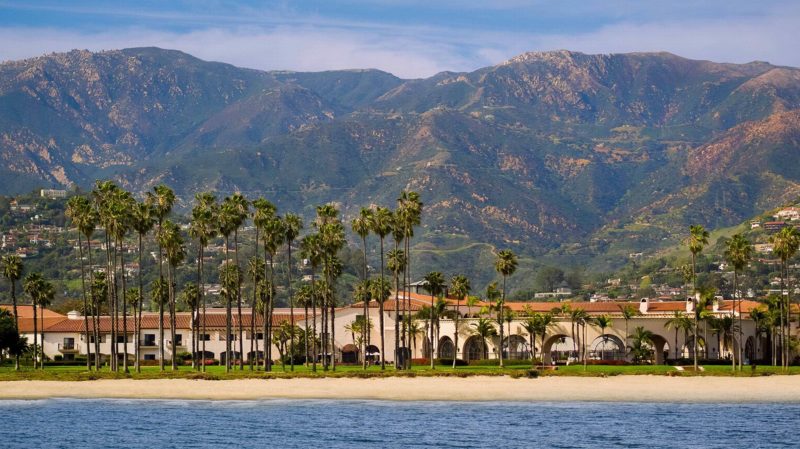 Another great hotel option with spacious rooms and suites is the recently renovated Hilton Santa Barbara Beachfront Resort (formerly known as Fess Parker Hotel). The resort is located across from the beach and is easily accessible to the Amtrak Station via shuttle service. After a $15M upgrade and rebranding, the 360-room hotel is modern and luxurious with a fresh coastal design of blue tones and driftwood-inspired interiors. All rooms have private balconies or patios with garden, mountain or ocean views. In addition to a large heated outdoor pool, guests will find a fitness center, spa and tennis courts for recreation. 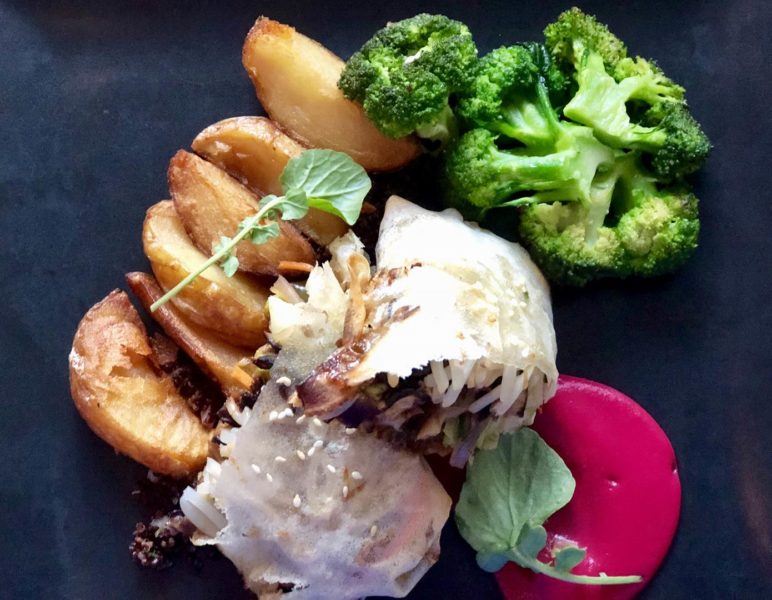 Get ready for a special dinner… the Perez family created the Black Sheep restaurant as a place where they could experiment with different cuisines, always using the freshest of ingredients. Their creative menu features Latin, Asian and Italian dishes, made with French techniques  — try the Peruvian potato tacos, ramen, scallops or baby back ribs, just to name a few. Plenty of vegetarian dishes are offered, like the nachos with roasted cauliflower, fried kale, black beans, pickled Fresno chilies, queso cotija and crema Mexicana. The food is playful and delicious with unexpected elements. Chef Robert prepared a vegan French/Asian phyllo wrap for me, which is one of the most delicious meals I’ve ever had.

Santa Barbara is going through an exciting transformation, with a new luxury resort, vibrant new eateries and major hotel rebrands. A brand new food complex in the Funk Zone, Tyger Tyger, iis getting rave reviews. This Southeast Asian restaurant has three different areas — “fast fine” food, Asian-inspired soft-serve ice cream (Monkeyshine) and local coffee (Dart Coffee). Personally, I can’t wait to try all of them on my next trip to the American Riviera!