From Amsterdam to Haarlem, Michael Webb explores the busy city life to the quiet countryside in the Netherlands.

Nearly every trip to the Netherlands begins in Amsterdam even though it has become one of the most expensive and touristy cities in Europe. It’s a short train ride from Schiphol, the country’s major airport, but you can as easily detour to Haarlem, which has preserved its historic legacy and its intimate character. The old city hall and gabled houses enclose the Grotemarkt, which is crammed with high quality food stalls. St Bavo’s cathedral towers above everything else, and the interior is flooded with light from clear glass windows. Columns are painted to resemble tapestries, there’s a wrought iron choir screen, and a wonderfully ornate organ that was played by Handel and Mozart. There are other classic churches, the Franz Hals Museum, and a quirky cabinet of curiosities called Het Teynial. The former V&D department store is a fine example Dutch modernism, but for me the most appealing feature of Haarlem was its labyrinth of narrow cobbled lanes. 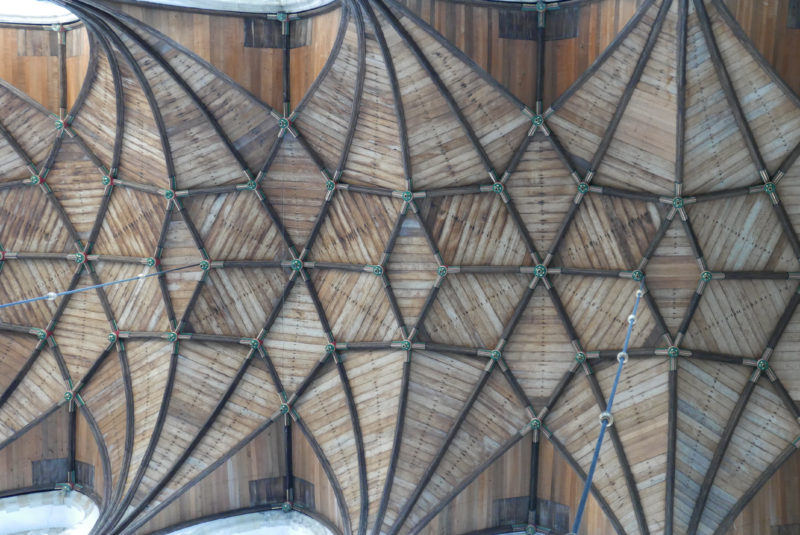 A network of storied cities, easily reached by train from Amsterdam, boast the same inspiring mix of old and new. Utrecht is a pilgrimage site for admirers of Gerrit Rietveld, who designed the red-blue chair and the Schröder-Schräder house, a tiny, early modern masterpiece. You can also visit a little-known gem that was inspired by Rietveld: a triangular house that Mart van Schijndel designed for himself in 1991 and shoehorned onto a hidden site once occupied by stables. It’s maintained by his widow, Natascha Drabbe, who gives regular tours and launched the Iconic Houses association to protect and promote other modern house-museums in Europe and the US. The 1923 post office will soon have a new role as a public library and its main hall is as grand as a cathedral with its arched vault of glazed yellow bricks, ribbed glass, and black statuary. 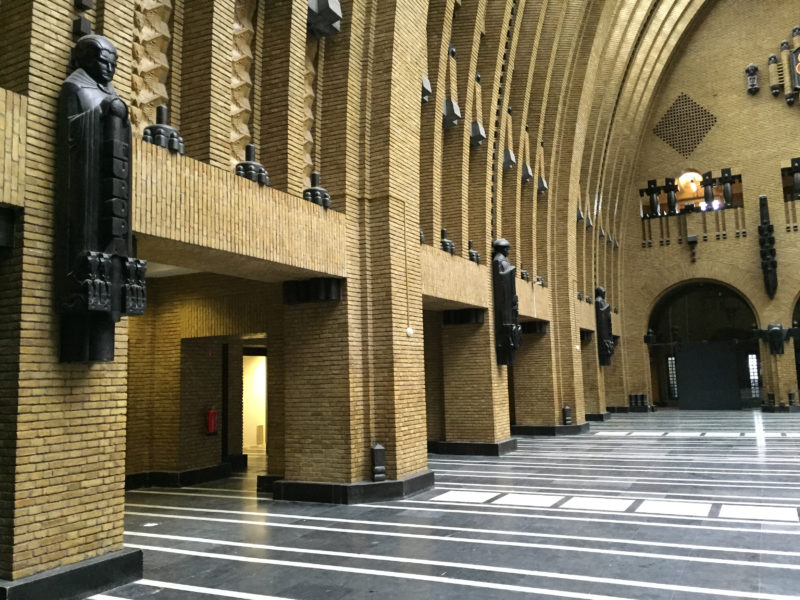 Close to Utrecht is Hilversum, with the yellow brick City Hall of Willem Dudok, and Jan Duiker’s Zonnestraal Sanatorium, a poetic interplay of gleaming white orthogonal blocks and rounded bays, subtly overlaid, and linked by spiral staircases. Both have been impeccably restored as time capsules of progressive architecture around 1930. The city was once a hub of European broadcasting, and that legacy is celebrated in the striking Institute for Sound and Vision, which doubles as a museum and an archive.

Away from the bustle of Dutch cities is the pastoral landscape that painters celebrated: grazing cows, still canals, clusters of trees and a huge, cloud-dappled sky. On a misty September morning I drove out from a rural b&b to the Nationaal Park de Hoge Veluwe. This expanse of woods and dunes was the private estate of Anton and Helene Kröller-Müller, who bequeathed the land and their extraordinary art collection to the nation in the 1930s. The sober brick museum that Henry van der Velde designed in 1938 is as unpretentious and open to nature as Louisiana in Denmark, and the art is as good and varied as in almost any metropolitan institution. 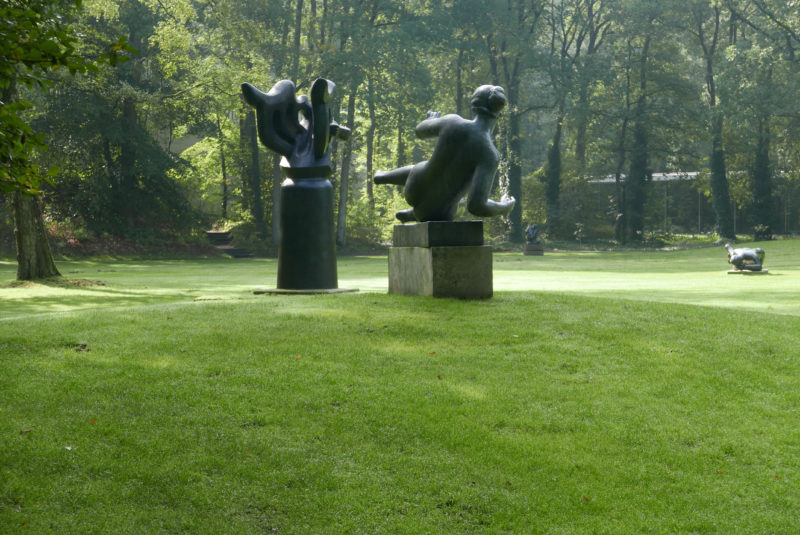 A scarlet X of red-painted steel by Mark di Suvero emerged from the lawn like a giant asterisk, evidence that the museum has continued to collect, eighty years after the death of its founder. I had expected crowds on this fine Sunday, but I had the place almost to myself. In Amsterdam’s Van Gogh Museum, a row of heads block every painting; here, a room of his masterpieces was deserted for the first 15 minutes. Moments like this are increasingly rare–an opportunity to enter the soul of a great artist and savor every brushstroke.

I wandered outside, pausing at the pavilion that Gerrit Rietveld added in the 1950s: planes of concrete block that seem to slide past each other and frame bronzes by Henry Moore and Barbara Hepworth. The sculpture garden is idyllic–classic modern pieces widely spaced on smooth lawns (ravaged by moles) amid pools and mature trees. A hazy sun emerged and the whole scene shimmered. A restaurant is housed in a peaked tent open at the sides and served a very good salmon salad. Guards cycle around, and that would be the ideal way to explore this 600-acre garden.

Places to stay and eat.

In Amsterdam, my favorite hotel is the Ambassade, which occupies five houses on the Herrengracht canal. It’s family owned, with warm, capable service, and the restaurant is first class. The decor is traditional but the owners have a fine contemporary art collection. I also tried the terminally hip Lloyd’s Hotel, which is inconveniently located and retains the legacy of a doss house turned juvenile detention center. Atmospheric settings for dinner include De Plantage and De Kas (both housed in former greenhouses), and the Brasserie in the Ambassade.
In Utrecht, I stayed at Mary K (25 Oudegracht), and was given the spacious ground-floor studio in this boutique hotel. I lunched at Kim Made, a Vietnamese restaurant on the canal quay, and enjoyed Spanish tapas for dinner at the Black Fox, a block away. 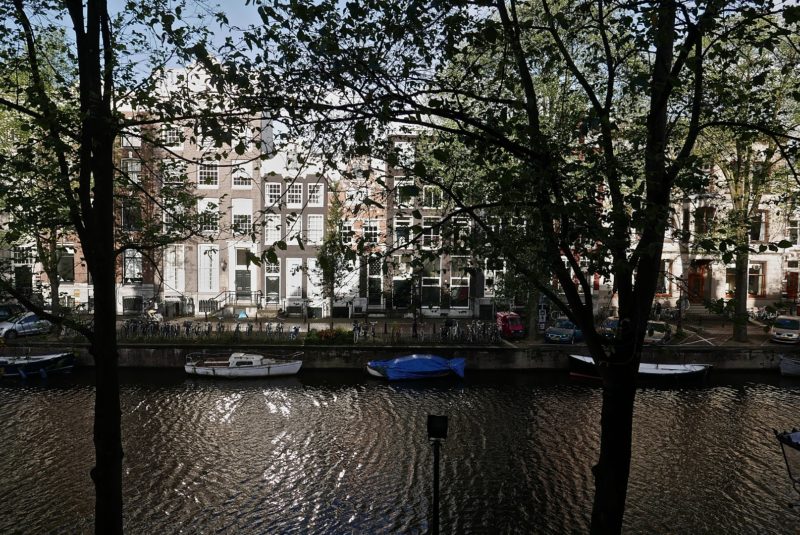 I would also recommend L’Embrasse, an exceptional b&b, at Rheden on edge of the Veluwe national forest. From here, you can cycle to the Kroller-Muller or into Arnhem.

Cyprus: the Island of the Gods' Timeless Appeal

The Fall of Provence