Michael Webb explores the City of Lights in winter, finding a new love and appreciation for its abundance of museums.

For lovers, Paris is heaven year round; in winter it’s equally compelling for lovers of museums. The chilly gray days make the boulevards and outdoor cafés less enticing, and prompt you to explore treasures you may have skipped in the spring. Every interest is covered, from aviation (at the Musée de l’Air in the hangars of Le Bourget (a former airport), to zoology (in the Musée d’Histoire Naturelle). Vintage models of fortified cities all over France are scattered through the attic of Les Invalides in the Musée des Plans en Relief, and 19th-century machines replace the figures of saints in a medieval church at the Conservatoire des Arts et des Métiers. But the arts reign supreme in Paris and there are always a few new attractions or revered institutions that have been enhanced since your last visit.

A splendid survey of French architecture through the centuries is on display at La Cité de l’Architecture et du Patrimoine. Installed in the Palais de Chaillot, it offers scaled-down replicas of landmark cathedral facades and changing exhibitions on the first floor, and a fascinating overview of modernism, from 1850 to the present on the second. From here, you can look across the Seine to the Eiffel Tower and then examine a cutaway model of the Garnier Opera to see that, behind its ornate stone façade, it has as innovative a structure as Eiffel’s masterpiece. 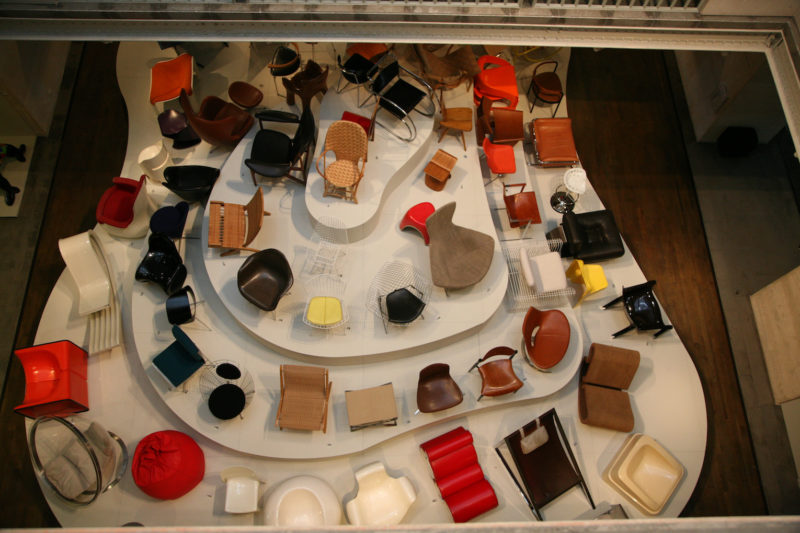 An array of modern furniture in the Musée des Arts Décoratifs

You can also explore the contradiction between 19th-century engineering and architecture in the newly restored Musée des Arts Décoratifs, which is located in the north wing of the Louvre. The façade, looking onto the Place du Carousel, is a riot of statuary, columns and cartouches. Inside, the upper floors—previously used for storage and as a refuge for pigeons—are enclosed by a simple steel and glass shed roof. This makes a wonderful foil for 20th-century furniture, which is arranged by decade, with the ‘forties at the top and contemporary work five levels down. The history of French design from the Middle Ages to the ‘thirties is explored chronologically on the first two floors of the museum. There you can peer into the bathroom and boudoir of couturier Jeanne Lavin who seems to have been inspired by an oriental harem. Her apartment was created in 1925, along with a library-study of palm wood designed by Pierre Chareau for that year’s landmark exhibition of Art Déco. 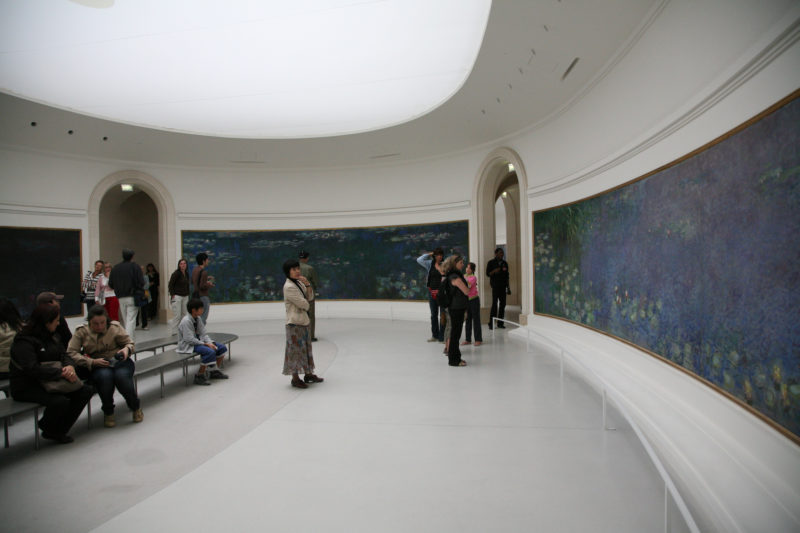 Monet’s waterlilies in the Musée d’Orangerie

At the end of the Tuileries Gardens, looking down on the Place de la Concorde, is the Orangerie, where you can immerse yourself in watery world of Monet. Eight of his largest waterlily canvases were installed in two skylit oval rooms in 1927 just after the artist’s death. Elliptical leather benches at the center of the room allow you to contemplate each painting in turn and imagine yourself to be a frog sitting on a lily pad in the pond at Giverny. 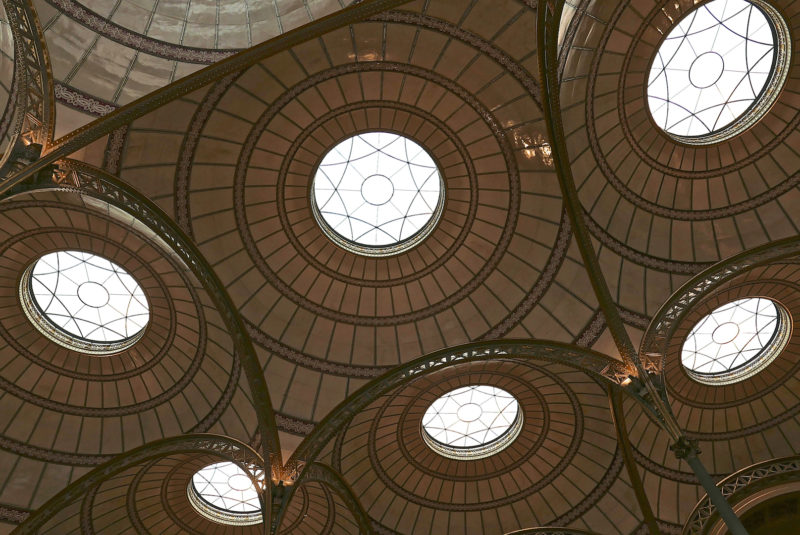 Skylights of the Bibliothèque Richelieu

When the French National Library was relocated to an inflated monument beside the Seine, its former home on the rue Richelieu was transformed into an arts library that is open to the public. Restoration of the main reading room, a masterpiece of flared columns and circular skylights set off by pastoral murals, was recently completed. You can head upstairs to enjoy displays of rare books and theater costumes. Music lovers may want to experience Jean Nouvel’s Philharmonie, the new home of the Orchestre de Paris, and the nearby Museum of Musical Instruments. But the star attraction is La Seine Musicale, a jewel-like concert hall designed by the Japanese architect Shigeru Ban. It occupies the tip of an island in the Seine on the south-west boundary of Paris. 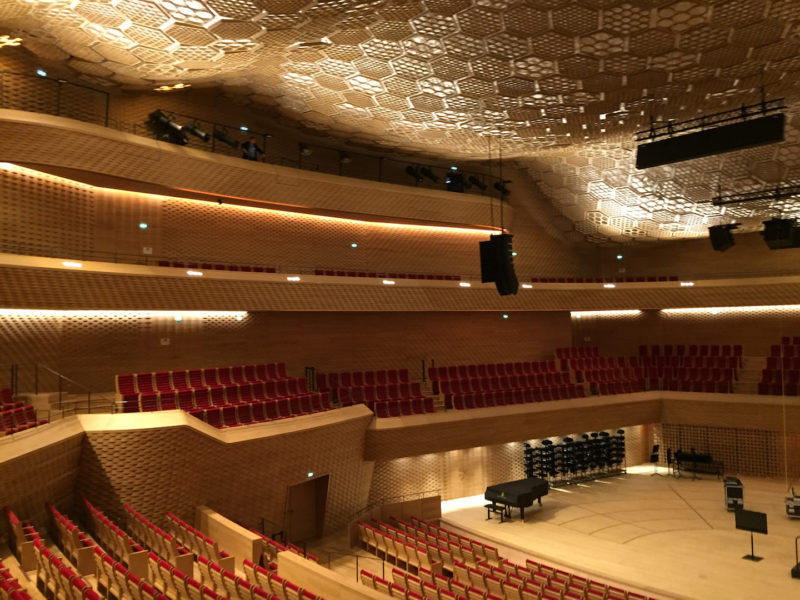 The studio of Constantin Brancusi, reinstalled beside the Pompidou Centre

My favorite Paris interior at any season is the Atelier Brancusi, located on the Place Georges Pompidou across from the Pompidou Center. The Romanian sculptor Constantin Brancusi spent most of his life in Paris and, before his death in 1957, bequeathed his studio to the State. The working areas are densely populated with major works in wood, stone and plaster, arranged as the artist left them, which can be viewed from a peripheral corridor through walls of glass. Admission is free but visitors are few, and you can sit here quietly for an hour and get inside the head of a great modern artist. 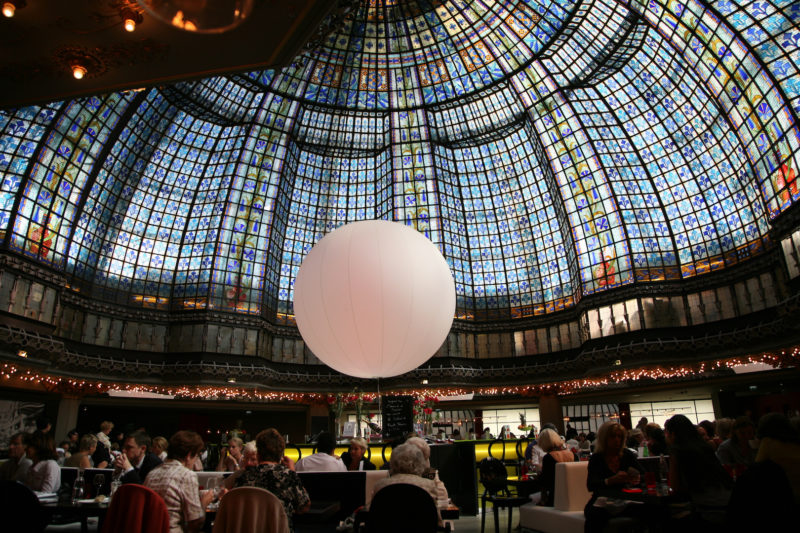 When you’ve had your fill of the arts, it’s time to enjoy a leisurely meal in a setting as rewarding as what’s on your plate. Consider a lunch at Le Printemps department store, in the brasserie beneath its stained glass dome, or oysters and a glass of Sancerre in the Art Deco gem of Prunier. La Coupole brasserie will take you back to the Belle Epoque and there are cozy bistros in every district of the city. 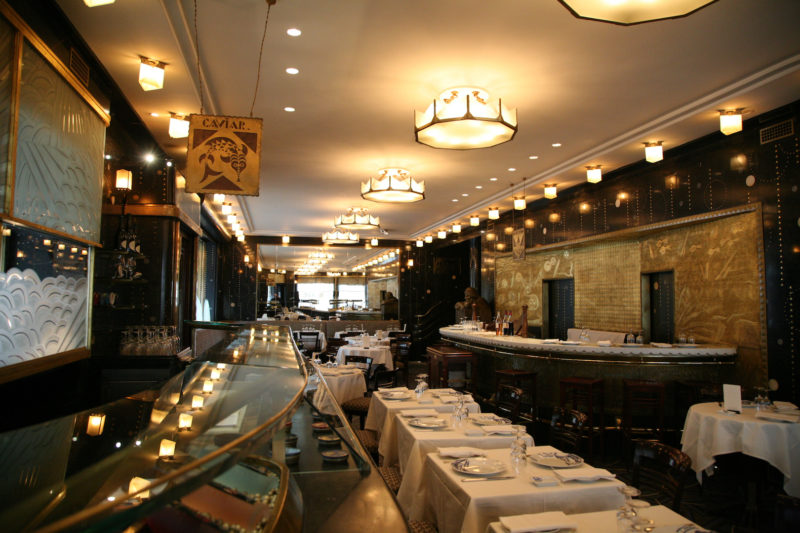 Prunier, a gem of Art Déco

And once you’ve indulged, take some exercise in the sequence of 19th-century glass-roofed shopping arcades. They extend in a linear sequence from the Palais Royale to the smart Gallérie Vivienne, and after a break for the Bourse, resume their course. You could spend a day exploring one-of-a-kind boutiques in a world of fantasy that puts contemporary malls to shame.

A Place for Witchcraft and Espionage in BERLIN's New Museums