Kristina Foster embarks with her family on a voyage through France from the capital to the coastal south. 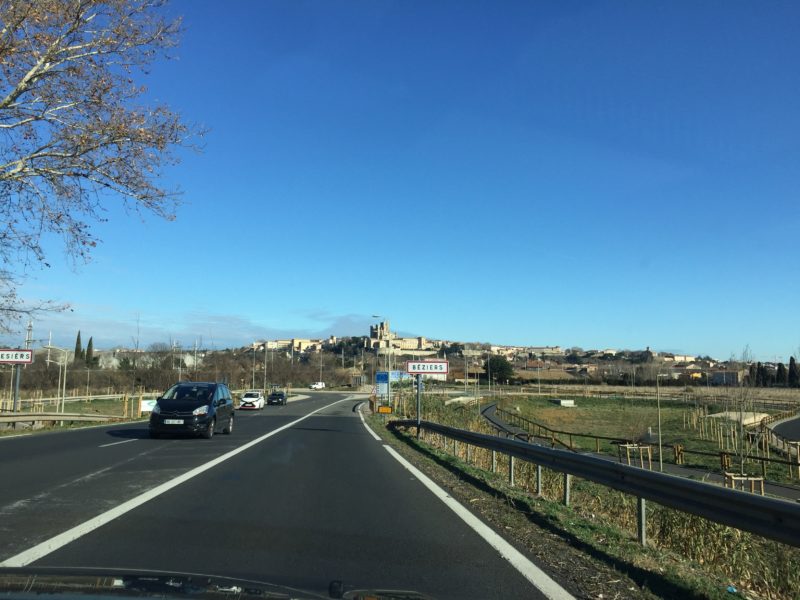 A road trip in regional France is peppered with ancient castles and fields of vines | Photo: Kristina Foster

I wasn’t sure what to expect on a fortnight long, winter road trip with the kids. Cooped up childhood memories of backseat battles with stinky brothers, side of the road toilet stops and barf bags came flooding back. Would we all still be on friendly terms for the long plane trip back?

Beckoning fate, we started our journey at The Louvre – the largest art museum in the world, a 72000 square foot palace containing more than 35000 works spanning the 6th Century B.C to the 18th Century AD. 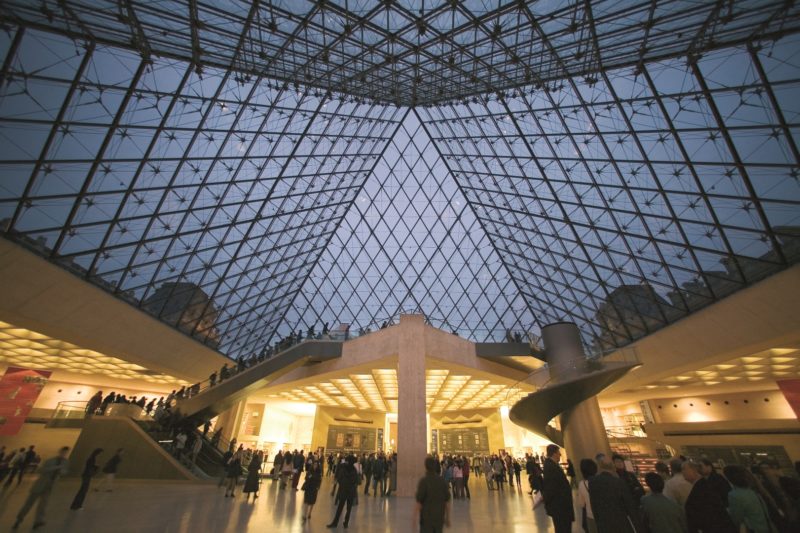 Staring down into the famous glass pyramid I wondered how we would curate this behemoth into child-sized portions. Paris Muse, a group of art history museum guides offering bespoke tours, answered our SOS call in the form of Julien, a tall, neatly bearded Parisian. Oozing left bank cool, at first sight I wasn’t sure he would be up to the challenge of the 8 and 12-year old museum skeptics.

But just as my daughter was about to whip out the tween eye-roll, Julien whispered eerily “we’re going on a quest” and led us down a dimly lit staircase.

“A Mesopotamian royal dignitary has passed to the underworld. Follow me to his tomb. Welcome to Egypt.” 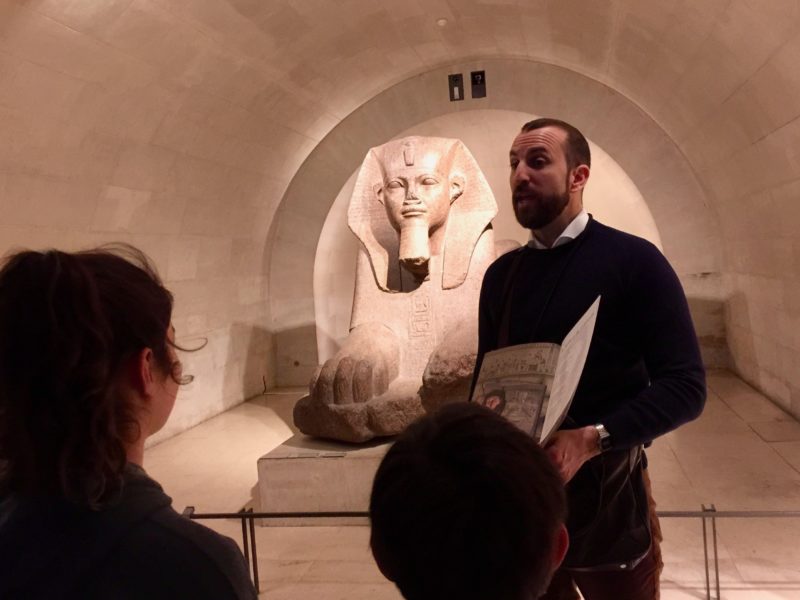 The gateway to another world starts in the Louvre basement with the Sphinx of Tannis | Photo: Kristina Foster

The spellbinding adventure began with the riddles of magic amulets, evil goddesses and mystic mummies through the realm of Aphrodite and rose to a gripping crescendo with the tales of Cupid’s quiver. 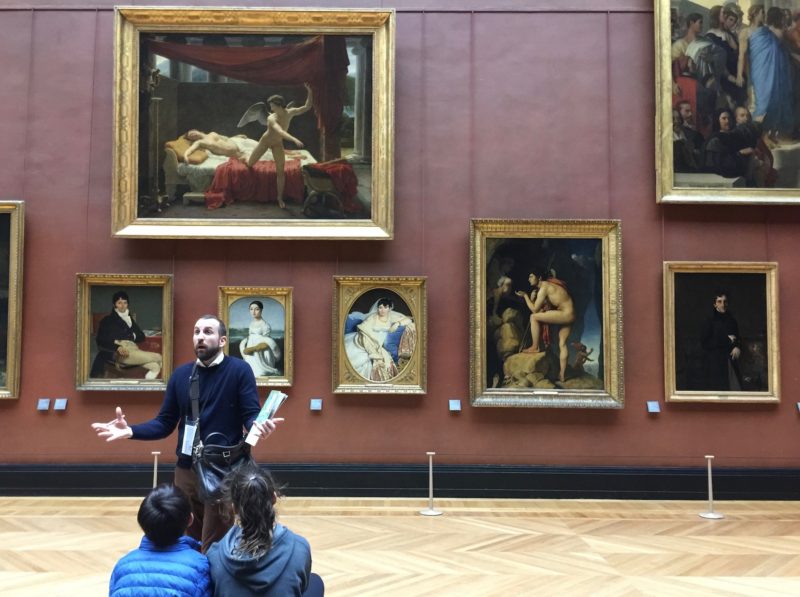 History comes to life at the Louvre with captivating tales of love and deceit | Photo: Kristina Foster

On our way to the must-see Eiffel Tower we detoured to the less travelled Museum National d’Histoire Naturelle. Here the Grande Galerie de l’Evolution displays stuffed animals in their habitat with marine species rising up through perspex waters to jungle creatures on the savannah. 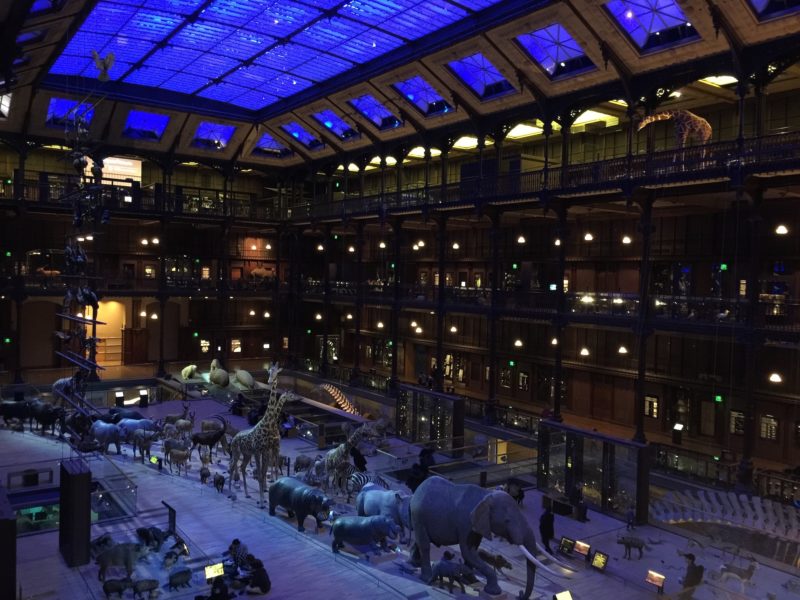 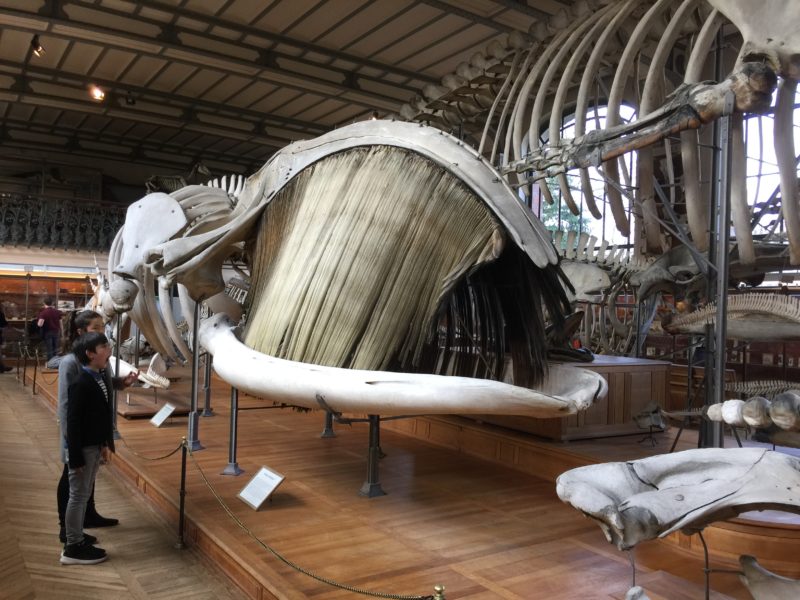 Next we squeezed the suitcases into the trunk and headed south-west to Chateau de Chenonceau in the Loire Valley, the land of fairytale chateaux and romantic riverside scenery.

Sitting atop a series of graceful arches amongst manicured gardens and a magical maze, the chateau has a history of passion, heartbreak and dangerous liaisons. The castle was a gift in 1547 from King Henri II to his lover Diane de Poitiers, a woman so seductive that the Queen, Catherine de Medici used to spy on the couple’s lovemaking through holes drilled in the floor above to understand her allure. 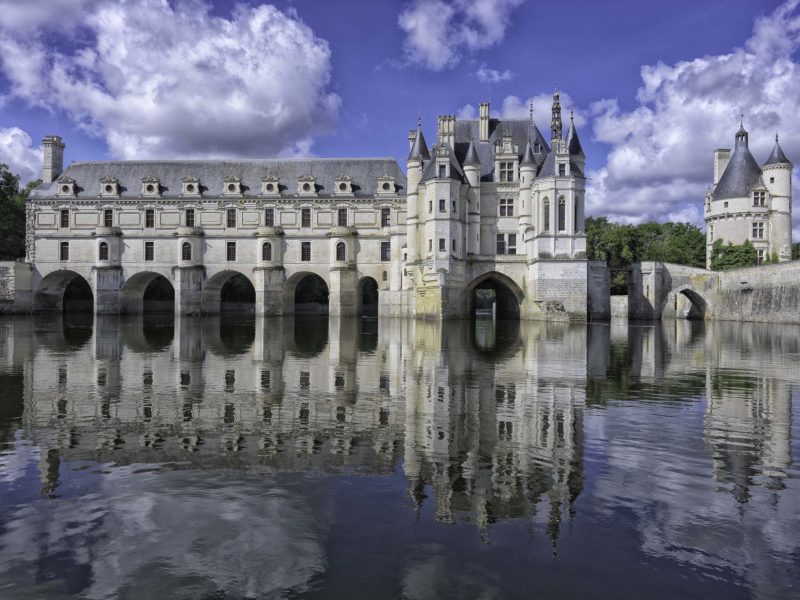 Traversing the banks of the Loire, we made our way to the Royal Fortress of Chinon. My son raced the vast stony courtyard to the giant catapult before scaling the stairs of every imposing turret, the fresh air and stately views proving an instant carsickness cure. As I retold the tale of Joan of Arc, we stood in the very room where, Prince Charles VII hid in disguise among his courtiers to test Joan’s divine inspiration, but the teen miraculously picked him out. 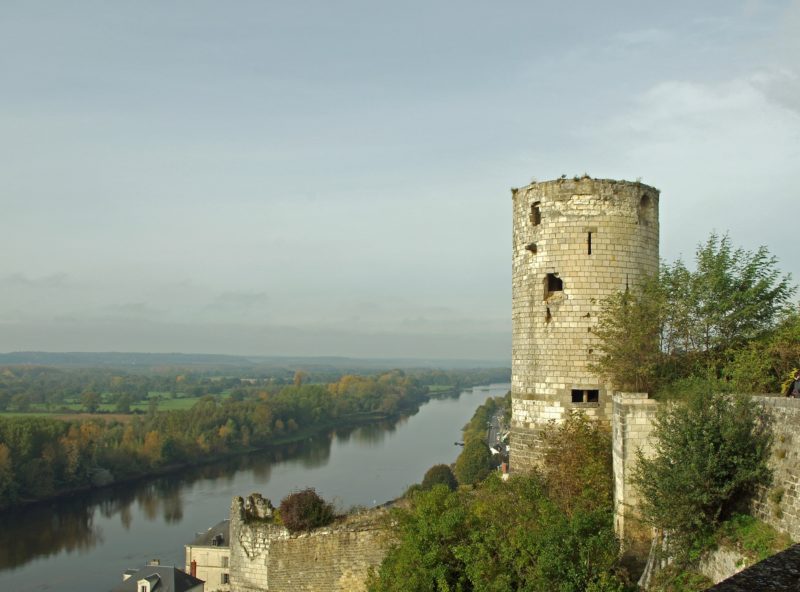 Joan of Arc arrived at The Royal Fortress of Chinon in 1429 claiming to hear heavenly voices telling her that Prince Charles would grant her an army | Photo: David Jolivet

Taking the A10 south we headed towards Bordeaux to visit Chateau Mouton Rothschild, one of the illustrious five ‘First Growth’ vineyards. With hushed tones we were led through halls of giant vats, down dimly lit caves to one of the world’s finest cellars. Snaking past oak barrels the kids were mesmerised by the wiry cellar master separating the ruby, glossy liquid from the sediment using only candlelight and ancestral know-how. The tour culminated with a tasting of the velvety 2016 vintage, probably the most expensive sip to ever have passed my lips. 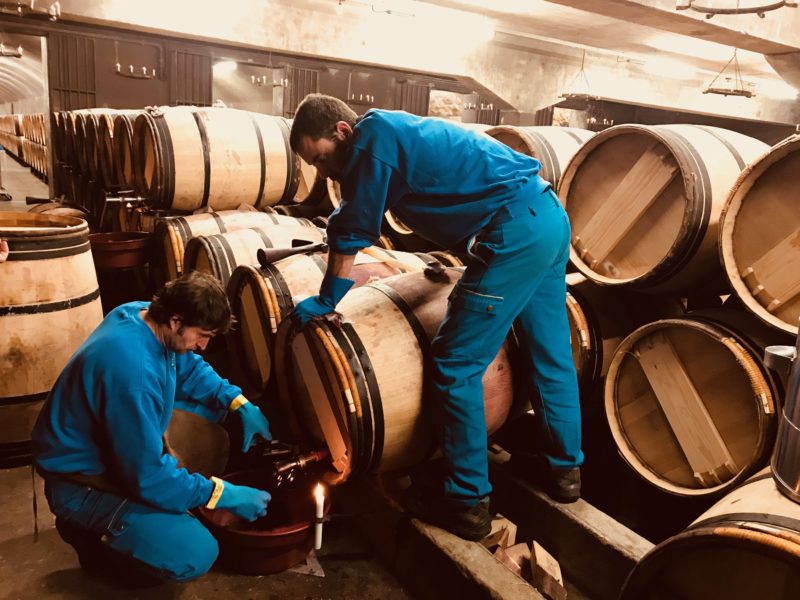 Treading east we sidestepped towards the ancient walled city of Carcassonne. On approach, the charming fortress wondrously emerges as if from a children’s storybook, rising up from the verdant hilltop with twisting battlements and soaring turrets. 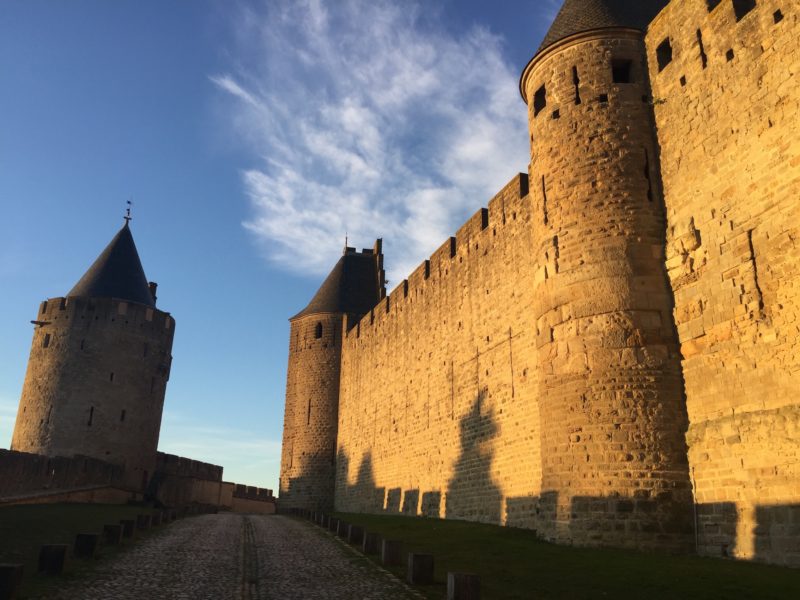 Cruising along the Camargue coast, past the strange blush colored salt marshes where the Rhone meets the sea, looking up to the sky, we were awe-struck by a flurry of flapping pink wings. Following the flamingo flock led us to the Parc Ornithologique de Pont Gau. 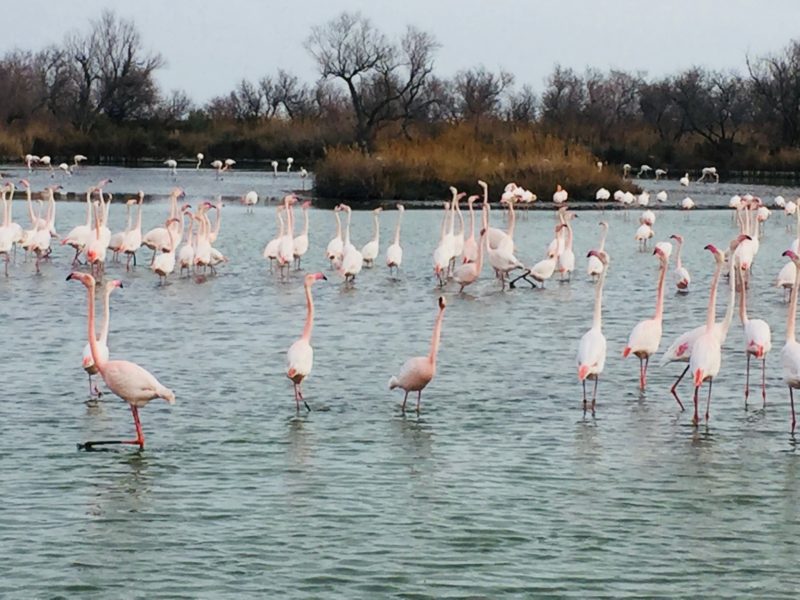 Come face to face with flamingos on the marsh trails of Parc Ornithologique | Photo: Kristina Foster

Traveling through Provence in winter lacks the purple fields of fragrant lavender however the chilly weather makes amends by bestowing the season of truffles. Hunting these black warty lumps was our next family forage. We followed our noses to Les Pastras farm, near Cadenet, where we met Mirabelle and Éclair, a snuggly terrier and a boisterous labrador, accompanied by their truffle hunter friends Johann and Jeanne Marc. Off the dogs surged through the oak trees with their snouts to the soil, merrily tailed by two giggly children. Swiftly, with a kerfuffle of frenetic digging followed by shrieks of delight, the skilled pooches had hit black gold. 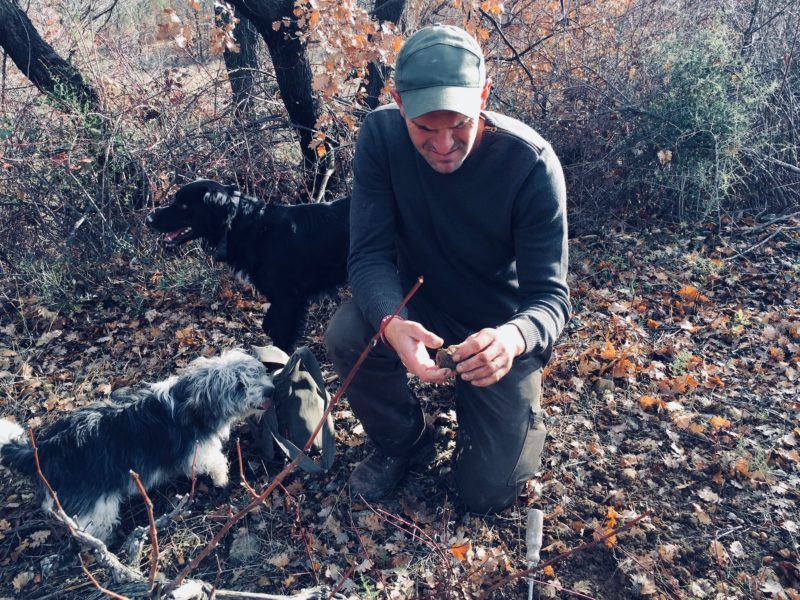 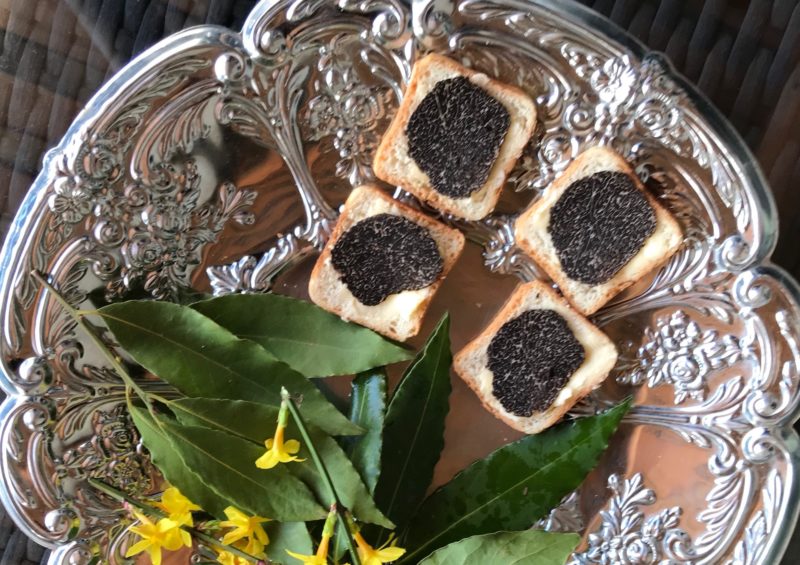 Whilst truffle dogs are rewarded with bacon bits, the humans are indulged with slivers of fresh truffle | Photos: Kristina Foster

From the inland fields we shuffled along to Cassis, a fishing village boasting stretches of picturesque cliffs and fjord-like inlets named ‘Les Calanques’. Eager to escape the confines of the backseat, the youngsters frantically barrelled ahead on the meandering hiking trail through the deep canyons along the azure coastline. It was the perfect sedative to a holiday break that was busting at the seams. As we skimmed rocks from the limestone headland I reflected on our road trip. We had certainly left no stone unturned and despite a persistent chorus of ‘are we there yet’, escaped with the family spirit unscathed, reminding me that the best thing about memories is making them. 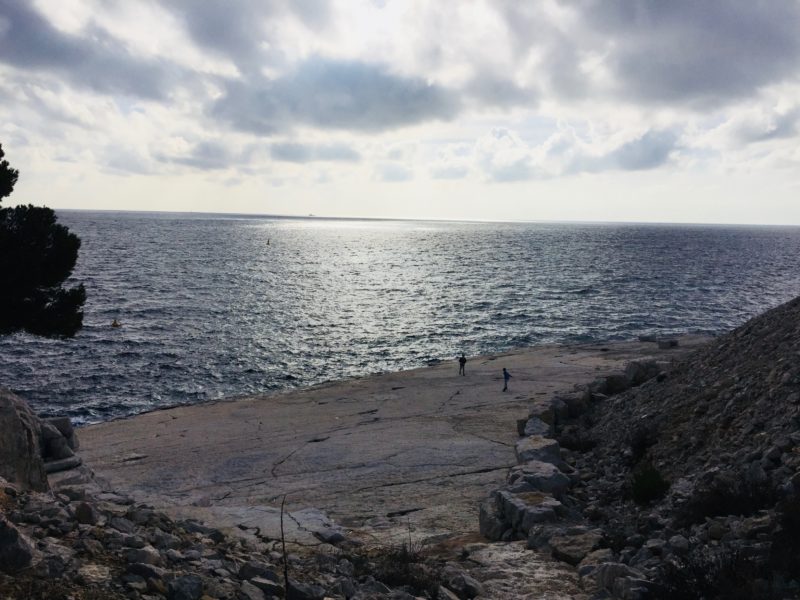 Taking in the view from a limestone inlet whilst hiking les calanques from Cassis | Photo: Kristina Foster

The Fall of Provence