In its fifty plus years of independence, the city-state of Singapore has transformed itself into an Asian version of Switzerland: prosperous, clean, and meticulously organized. But the vibrant street life of its multi-cultural enclaves–Chinese, Islamic and Indian–still flourishes amid the gleaming towers. Taxis and Uber can be scarce, but the subway network is a paragon of efficiency. Greenery softens the buildings and street-food has moved into airy market halls while losing none of its authenticity. I was curious to sample the local specialties and the latest work of local and international architects.

Forty years ago I had a one-day stop-over in Singapore while traveling on a round-the-world ticket. It was intimidatingly steamy, I had no idea what to see, and spent most of the day in the crumbling splendor of Raffles Hotel, cooled by ceiling fans and refreshed by their famed gin slings. That British colonial landmark is presently closed for restoration: I chose to stay for six nights at the Oasia Downtown. Hard to imagine a greater contrast: Raffles still evokes the era of white linen suits and solar topees; the Oasia is cutting-edge: a tapered tower, clad in red metal mesh that supports 30 kinds of creeper. Public areas open onto shady sky gardens, and breezes are channeled through to provide natural air-conditioning. 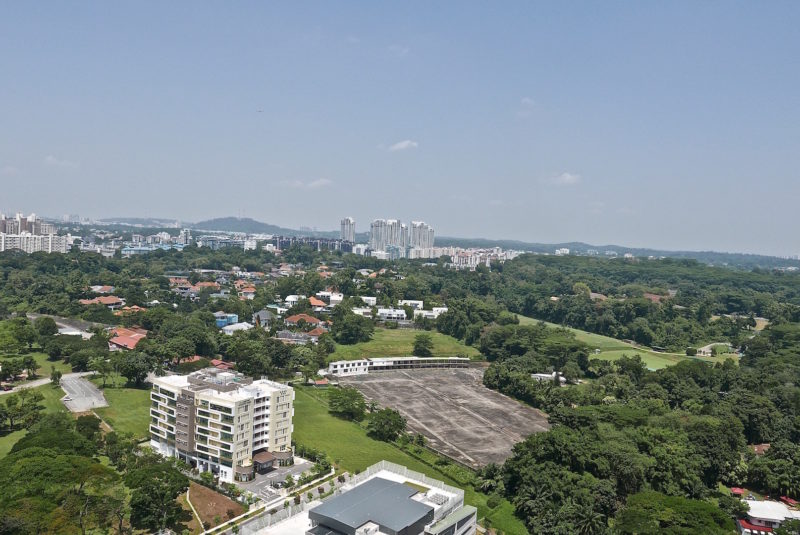 Traveling in the relatively dry month of February, my friend I were lucky with the weather. The wind was blowing from China, and it made the 80 degree temperatures quite bearable. Singapore is almost on the Equator, and when the winds are southerly the humid heat can be oppressive. Local architects take their cues from traditional buildings with their shady porticoes and breezeways, and the government demands that every new commercial development devote a quarter of its site to a public garden. 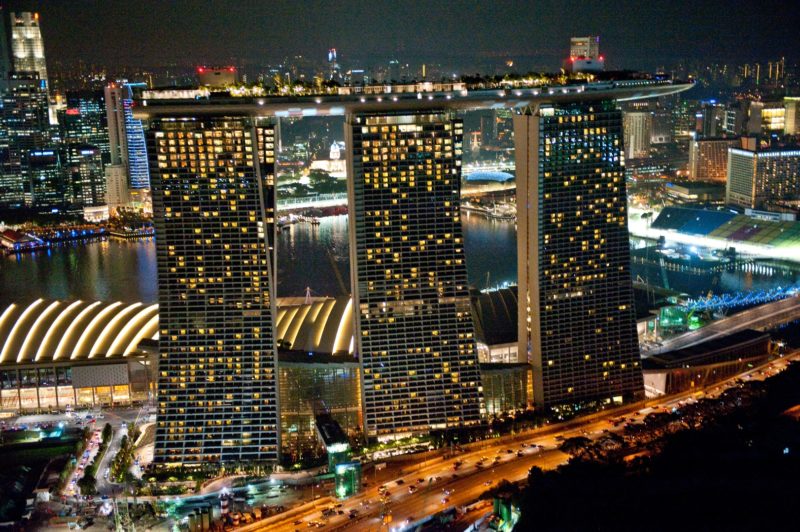 The newest attraction is Marina One: two office towers and two apartment towers of occupying four blocks of reclaimed land, and overlooking a waterfront park. They rise sheer from the sidewalk, but step inside the shopping center that occupies the first three levels, and take the escalator to the central courtyard and you’ll be transported to a tropical rain forest. The inner facades of the L-plan towers undulate around this multi-level garden planted with mature trees and shrubs. Footpaths thread among water features; sun shades and ramps tie the four blocks together and lead up to restaurants and more greenery. Across the island almost every tower incorporates gardens that are accessible to everyone, 24/7. A notable example is Sandcrawler, a George Lucas project that is home to animation companies. 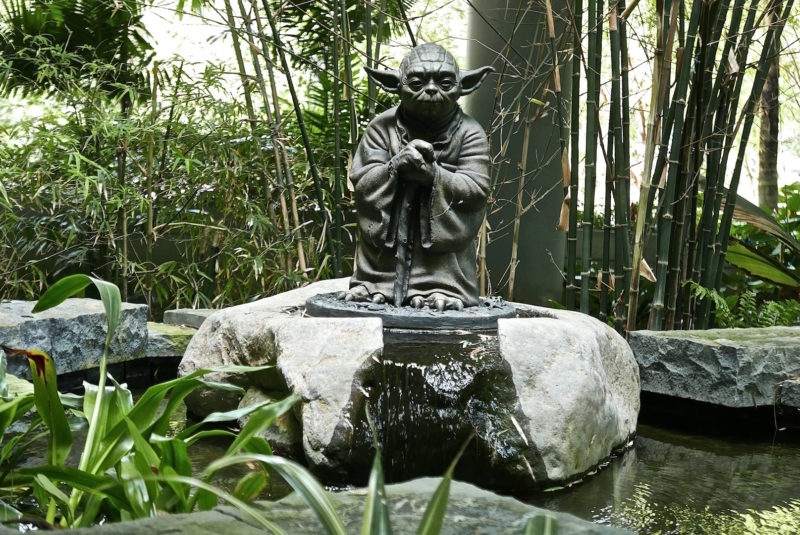 At the heart of this high-rise green city are streets lined with traditional three-story shop houses dating from the years of British rule, as do the stately white government buildings. The bustling port–today, it’s the second largest in Asia–drew immigrants from far afield. The Chinese dominate and we were there for the start of their New Year celebrations, with street parades and red lanterns suspended over the main shopping street. Chinese restaurants were jammed with family parties–no room for a couple of Westerners–but friends reserved a table at Hua Yu Wee (452 Upper East Coast Road). We sat outside in a huge expanse of tables and were served a set dinner of holiday salad, tossed high with loud cries to mix the varied flavors and bring good luck, crab and shark’s fin soup, deep fried tofu, rock lobsters, stir fried noodles, sweet cakes, and iced beer. 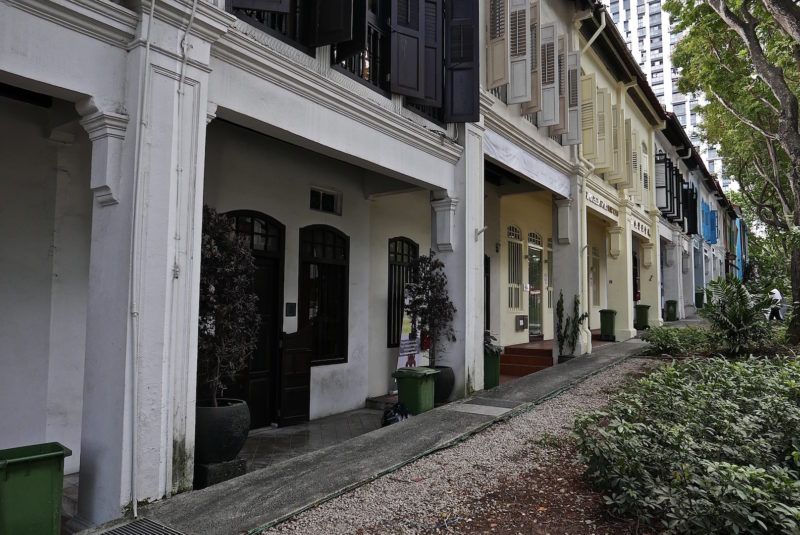 Eating street food in Asia can be hazardous to your health, but in Singapore government inspectors ensure it’s super safe. The most central of the food halls is Lau Pa Sat, where we had overpriced chile crab and barbecued langoustines in what felt like a tourist trap. We much preferred Maxwell’s for its chicken rice, pork-rib soup, fried-prawn noodles, popiah (a delicious spring roll)–and too many choices to keep track of. Prices are rock-bottom and competition keeps every vendor on her toes. Sadly we missed Folklore, a new and highly acclaimed restaurant in the Destination Singapore Beach Road Hotel, where chef Damian D’Silva carries street food to new heights of excellence. 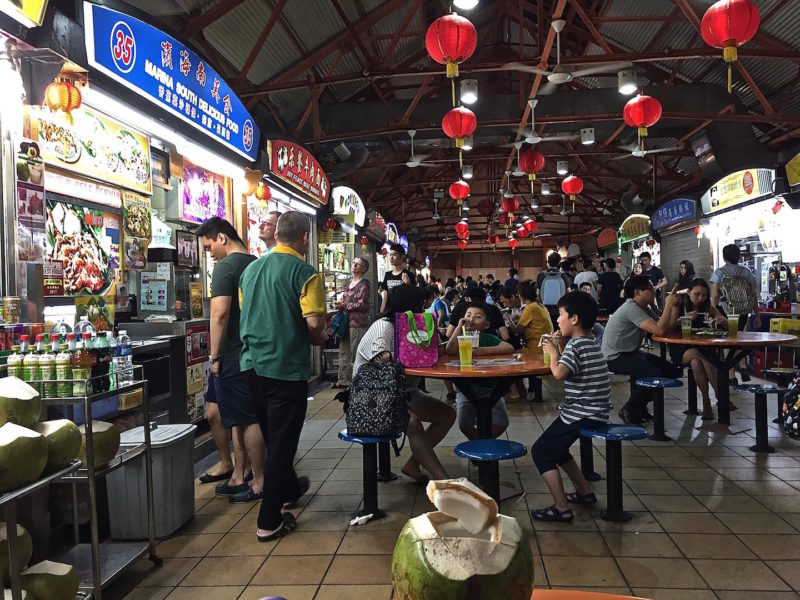 I would also recommend Candlenut on Dempsey Road, an upscale restaurant and craft store serving refined variations on traditional recipes, and Zam Zam, a popular restaurant across from a gold-domed mosque in the Moslem quarter, for mutton murtubak with a pile of aromatic rice, and chicken biryani, spiced in a pastry wrapper. The bill came to $15 a head, a steal in this costly city. We spent our last night at the Amoy boutique hotel, ingeniously inserted into the first Chinese temple in Singapore. 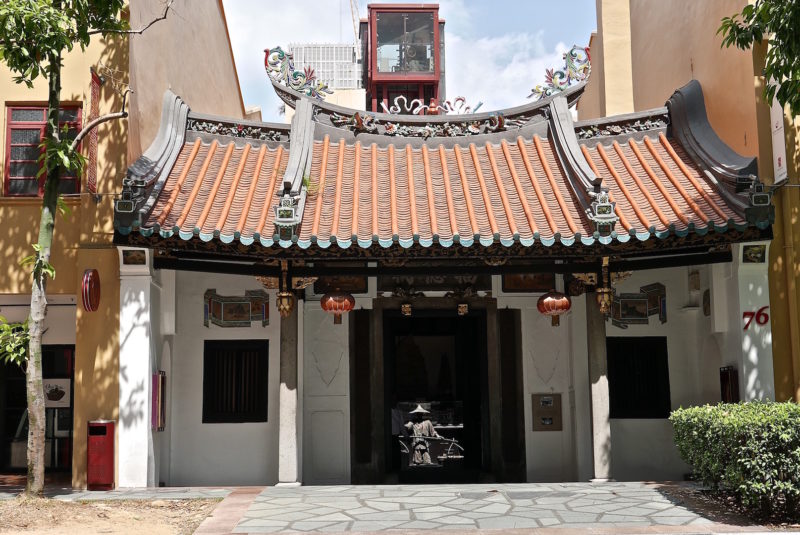 On the Waterfront, SHANGHAI

For All the Tea in CHINA